Back to the articles

When psychoactive substances and sex intertwine

Engaging in sexual activity after drinking or using drugs is one thing. Drinking or using drugs in order to engage in sexual activity is quite another. This is known as «sexualized drug use», a practice that takes on many forms, from using alcohol as a crutch to the chemsex culture. Some people use this practice occasionally while others develop an addiction and need specialized help. Here is an overview of a phenomenon that is not very visible, yet is widespread.

What is sexualized drug use?

Sexualized drug use is defined as intentionally using psychoactive substances before or during sexual activity to prolong and/or intensify the experience, diversify practices or even improve sexual performance. Various substances can be used: alcohol, cannabis, cocaine…

It is all a question of intent. In fact, it is considered sexualized drug use when, for example, a person drinks enough alcohol to reach a desired state of inebriation to engage in sexual activity. This situation is different from the person who is drinking with friends at a bar, meets someone and then goes home with them. In both cases, sex happens under the influence of alcohol. However, the original intent was not the same.

Sexualized drug use has many objectives:

Thus, using drugs can enable some people to have the sexual relations they want to have by freeing themselves from different social pressures related to sex, such as, the “sexual performance” or “perfect body” cults. Pressures that are more prevalent in certain communities.

An over-representation of gay and bisexual men

These characteristics unique to sexual minorities can also push them to seek refuge within the gay community, where, according to the study, “certain spaces for sexual socialization such as gay saunas and raves are described [by participants] as being conducive to drug use and the discovery of new substances.” (p.39)

A willingness to explore, self-discovery, social stigmatization, building social circles based on drug use and easy access to substances are all reasons that can also foster sexualized drug use among gay and bisexual men.

Chemsex: a form of sexualized drug use

It is all in the name: the term chemsex is made up of the words “chemical” and “sex”. Chemsex was conceptualized in the 2010’s by British activist and Social Worker David Stuart, who gives the following definition:

According to David Stuart, chemsex is a phenomenon exclusive to gay culture due to different factors that are unique to it. He explains that within the gay community, pleasure associated with sex had been mainly ruined by:

All these factors can therefore contribute to the chemsex experience. The use of drugs meets the need to be sexually freer, rid of the inhibiting factors mentioned above. Other than chemsex, these factors can also lead to sexualized drug use described earlier.

Chemsex other than in the gay community

By becoming popularized mainly by mainstream media, the term chemsex is now used to describe, more broadly, prolonged sexual practices, often in groups and under the influence of drugs, whether homosexual or heterosexual. A mistake, according to David Stuart, who adds: “If your understanding of the term “chemsex” has been informed by the general media, you’d be forgiven for thinking it defines the use of drugs or alcohol for sex, by any population.”

To learn more about the definition and history of chemsex, go to David Stuart’s website.

Sexualized drug use: addiction and risks

Sexualized drug use is not necessarily problematic in and of itself, and for a large number of people it does remain an occasional practice. However, just like any practice involving psychoactive substances, it can become addictive followed by such consequences as tolerance, increasing doses, mixing substances, risk of overdosing, etc. To learn more about the risks associated with psychoactive substances, you can read our articles on amphetamines, alcohol, cocaine or even cannabis.

Moreover, the sexual context in which the addiction sets in, brings with it an additional issue to that of just drug use.

“A lot of people got introduced to sex through drug use.” 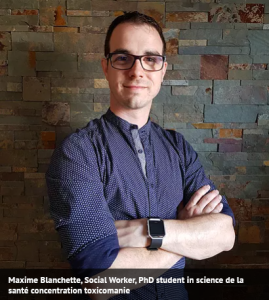 Maxime Blanchette, Social Worker, Professor at Université du Québec en Abitibi-Témiscamingue (UQAT) and PhD student in science de la santé concentration toxicomanie l’Université de Sherbrooke explains (translated from French): “A lot of people got introduced to sex through drug use (alcohol, MDMA…). We will often use to have fun: before going to a bar, to a rave, etc.  Then, one thing leads to another and a relationship is built between drug use and sex […] That’s when addiction starts to set in.”

The systematic association between sexual activity and drug use is sometimes so strong that many people become unable to have satisfactory sexual relations without using.  Consequently, the withdrawal period may be accompanied by a time of sexual abstinence, before slowly being able to get back to sober sex, which can make the withdrawal period more difficult.

Other than risks associated with drugs, sexualized drug use can also foster risky sexual practices: not using condoms, “extreme practices” that can cause injuries, not bothering with getting consent, etc.

Prevention and getting help: limited availability of services

When addiction develops within the context of sexualized drug use, healthcare services reach a certain limit.  There are a lot of services for sexual health, as well as, for addiction, but when the two mesh, it becomes harder to find help.

An observation made by researchers Mathieu Goyette and Jorge Flores-Aranda in the article Consommation de substances psychoactives et sexualité chez les jeunes : une vision globale de la sphère sexuelle. About sexual health, it states: “Other than a few interventions aimed at groups that are judged ‘at risk’, the sexual sphere is limited to preventing and treating STBBI’s, family planning, assisted reproduction and some services that provide sex education.” On addiction services: “Apart from STBBI’s, we note that sexuality is not a part of any systematic assessment of needs, nor its association with the use of psychoactive substances.”

“Access to sexologists within the addiction network would really help”

This opinion is shared by Maxime Blanchette: “We should hire more sexologists and work in collaboration more. Not all counselors are comfortable with questioning clients about their sexuality. It is ok to recognize our limitations, but we must then be able to refer the person to another counselor. […] Access to sexologists within the addiction network would really help the treatment of such addictions.”

Since sexualized drug use affects sexual minorities more, Maxime Blanchette stresses the fact that counselors must be ready and willing to talk about sexual orientation. “Often, sexualized drug use is a symptom of something else. I try to figure out what could have happened that set them on this life course trajectory. We must be aware of sexual diversity and gender identity because a lot of things get swept up under sexual orientation. […] During the exploration phase, for example, there is more of a chance for drug use. There is a willingness to integrate, to be part of the community, to join the gay culture.” About the people he meets with, he adds: “They often have to let go of certain friendships, or else they will be led to relapse after relapse.”

However, Mr. Blanchette specifies that sexualized drug use is not only limited to gay and bisexual men and could affect, to a lesser degree, other populations. “Certain women who were sexually abused may need to use drugs in order to have sexual relations.” he explains.

Community resources at the forefront

Information, prevention, harm reduction, help: community organizations working mainly with the LGBTQ+ community have organized themselves to meet a need that is very present. Such is the case with RÉZO, a multiple resource organization: prevention, STBBI screening, workshops, documentation…A telephone number is also available for people worried about their drug or alcohol use: 514-377-2293. Go to the RÉZO website to find out more.

Other resources like Ça prend un village provides help to people with a crystal meth addiction, whereas at mybuzz.ca you can assess your alcohol and drug use habits and have access to various resources, as well as, a chat service.

To find a LGBTQ+ organization, go to the 211 Greater Montréal or 211 Québec régions websites. To find help or services for drug use and addiction, go to trouvetoncentre.com.

30 years of existence for Drugs: Help and Referral!

Retirement of Hélène Hamel, Director of the Specialized Addiction Helplines

Hélène Hamel, Director of the Specialized Addiction Helplines, will retire on April 14, ...